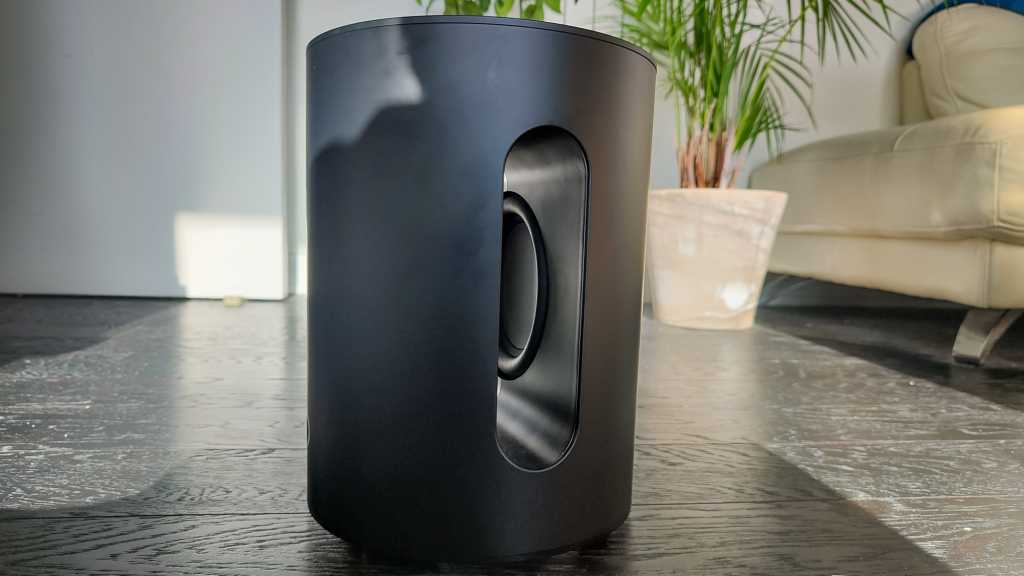 The Sonos Sub Mini will add a lot of oomph to sound systems built around smaller speakers like the Ray, Beam, or One, and not only at the low-end – it frees those speakers up to deliver sharper mids and trebles too. It’s expensive though, more than doubling the cost of those setups, and the better your existing speakers are, the less benefit you’ll get.

The Sub Mini is one of those wonderfully straightforward products: it’s a Sonos subwoofer, but smaller than their other one. It’s cheaper too, and is an excellent way to add bass on a budget.

The caveat is that the Mini is designed to pair with Sonos’s simpler speakers in smaller rooms, and the better your existing sound setup the less you’ll get out of adding a Sub Mini.

The Sub Mini is a simple enough looking piece of kit, though the first thing you notice is that it doesn’t quite earn its name.

This may be smaller than the existing Sonos Sub, but at 12in tall and 9in across, this isn’t a small speaker by any means – in fact it’s exactly the same height as a footlong sub, strangely enough.

It fits neatly into my square Ikea bookshelves, but if you’re not so lucky then you may be forced to accept a fairly squat cylinder sitting next to your TV for the foreseeable future.

Available in black or white, it’s an unassuming design at least, the front of which is broken only by a single small LED and the speaker’s single physical control. The ports are found on the bottom, and the only real flair to the design is its hollow centre, with the twin woofers facing one another inside, which is only visible from a side-on view.

Given the size you won’t be surprised that it’s pretty heavy too, but you’re unlikely to be moving it around much.

The Sub Mini doesn’t actually connect directly to any of your sound sources, but instead only connects to your existing Sonos network via Wi-Fi, with the extra option to use a wired connection to your network.

Adding the Sub Mini into your network is quick and easy – you just need to have the Sonos app ready to go on your phone, and a simple NFC-powered tap of your phone on the speaker connects it up to everything else.

The only downside is that the Sub Mini can only be connected to other Sonos products – so you can’t pick this up to serve as the subwoofer with any other sound system or soundbar.

The smart side of the Sub Mini mostly comes down to how neatly it integrates into the rest of your Sonos set-up.

Once it’s connected, you pair the Sub Mini to a specific speaker or room in your system – most likely to a soundbar, though it should pair with any of Sonos’s static speakers (i.e. everything except the portable Move and Roam).

The Sub Mini’s volume will then automatically raise and lower with the main speaker. If you want to tweak things that’s easy too – you can turn the Sub off at any time without unpairing it, and can boost or lower bass levels independently of the core speaker’s EQ.

The other handy touch is support for Trueplay, Sonos’s tech for tuning its speakers for the rooms they’re in. This should help optimise the Sub Mini’s sound wherever you place it in the room, making it a bit more forgiving to position – though to take advantage, you’ll need an iPhone or iPad to set Trueplay up. You only need it once though (or whenever you move the speaker), so it’s easy enough to borrow a friend’s.

So that’s how the Sub Mini works – but how well does it do it?

The answer, perhaps annoyingly, will depend a lot on what speaker you want to pair it with. Sonos recommends the Sub Mini for “small to medium sized spaces,” and says it’s best suited for the Ray and Beam soundbars, along with the One and Symfonisk speakers.

The Sub Mini uses a pair of 6in woofers, which face inwards towards one another in a force-cancelling arrangement that helps to neutralise vibrations and distortion. Essentially, that means it adds clean, tight bass without any unwelcome noise.

Paired with the Beam, or especially the compact Ray, the difference is considerable. The Sub Mini adds all sorts of oomph, driving basslines in music and adding room-filling sound to explosions and other filmic thuds. The Ray has never sounded thinner than immediately after switching the Sub Mini off, and it really takes those cheaper Sonos soundbars to the next level.

This won’t create room-shaking bass unless you really crank the volume up, but it rounds out the sound profile of the company’s smaller speakers, adding depth at the low end and freeing up those other speakers to deliver crisper high notes at the same time. That means it adds more than just bass, elevating your audio across the spectrum.

My usual TV speaker is the older (and discontinued) Sonos Playbase though, and connected to this the Sub Mini doesn’t add all that much. I suspect you’d find similar if you wanted to pair it with the Arc – the beefiest soundbar in the current Sonos lineup – or any of the company’s other larger speakers. For those you’ll really need the full-size Sonos Sub to notice the extra bass, unless you’re in a particularly small room.

If there’s a question mark around the Sub Mini, it’s the price: $429/£429/€499. That’s more than either the Ray or Beam, so Sonos’s imagined Sub Mini is at least doubling the price of their sound set-up by buying this.

I suspect that most people willing to spend that much on their sound system would have just bought the $899/£899/€999 Sonos Arc in the first place.

Still, the Sub Mini is markedly cheaper than the $749/£749/€849 Sub (Gen 3), and if you’re a Ray or Beam owner looking for the next step up, or have a pair of even smaller Sonos speakers, adding a Sub Mini makes a lot more sense than scrapping your whole system and swapping it for the Arc.

Is it worth dropping hundreds just to add some extra bass to the mix? Maybe. Maybe not. But you’ll only be looking at this if you’re on the hook with Sonos already, and in that case this is the best option you’ve got.

The Sub Mini is a great way to add more boss to a Sonos sound system for a bit less than the exorbitant price of the original Sub.

It’s still not cheap, and is only suited to those with smaller Sonos systems – if your kit is already high-end, the Sub Mini won’t be a gamechanger.

But Ray and Beam owners will find this transforms their existing soundbar, and is a great way to improve your Sonos sound without having to start again from scratch.