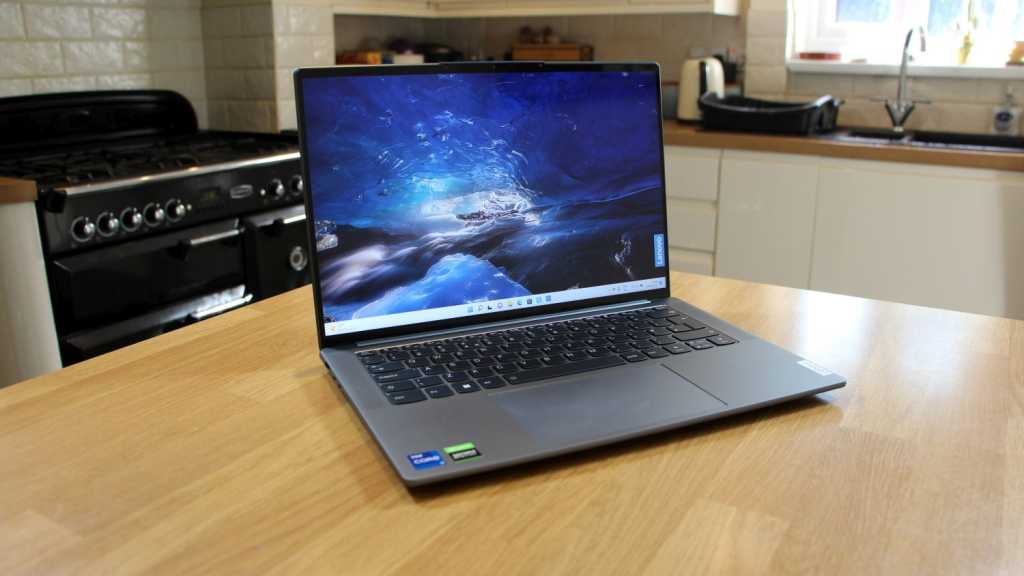 The Lenovo Yoga Slim 7i Pro X does a great job in key areas: its Core i7 processor is excellent, its chassis is sturdy and relatively slim, and it has a good screen, great keyboard and solid connectivity. That said, other laptops offer better battery life and more versatile screens inside slightly smaller enclosures.

Most laptops make compromises to get the job done – notebooks for creatives eschew slim designs for power, for instance, and thinner notebooks lack speed. The Lenovo Yoga Slim 7i Pro X tries to do it all, though, with a high-end processor inside a sleek design.

There’s loads to like about this machine, especially if you want a slim and light laptop with the grunt for creative work.

The Lenovo isn’t short of competition, either. If you’d prefer a small creative notebook from Apple then you can look at the MacBook Air or MacBook Pro 14, and Microsoft deploys the Surface Laptop 4 if you’d like to stay with Windows.

Lenovo’s Yoga machines have looked brilliant since day dot, and nothing has changed here. The casing is made from aluminium, and its edges combine subtle curves and sleek lines. There are slim bezels, minutely milled speaker grilles and a shining logo on the lid. It’ll hold its own in any office.

The aluminium chassis also lends the Lenovo impressive strength, so we’ve got no concerns about the Yoga’s durability.

The left-hand edge has two Thunderbolt 4 ports that support DisplayPort, USB-C and power delivery alongside a HDMI 2.1 output. The right-hand side houses a full-size USB port, an audio jack, a power button and a physical switch to disable the webcam.

The MacBook Air has two Thunderbolt ports but nothing more, while the MacBook Pro has an extra Thunderbolt and an SD card slot but no full-size USB. Microsoft’s machine has sole USB-A and USB-C ports. Huawei’s MateBook X Pro is another contender, at least in the UK and outside of the US, and it has four USB-C connectors but no HDMI and no full-size USB.

It depends on how you’ll use the laptop, but the Lenovo strikes a good balance: the inclusion of a full-size USB port means fewer adapters and the HDMI port means easy display connectivity.

Sadly, creatives will lament the lack of a card reader, and there’s no wired internet – connectivity comes from dual-band Wi-Fi 6E and Bluetooth 5.1. There’s no fingerprint reader, although the 1080p webcam does support Windows Hello.

At 1.45kg and 15.9mm thick, the Yoga is heavier than every rival except the MacBook Pro 14 and thicker than all its competitors. It’s not a dealbreaker, but the Yoga is a bit larger than the competition.

The sunken keyboard is another top-quality Lenovo design. The keys are slightly concaved and there’s a decent amount of distance between each button, which improves comfort and consistency. The buttons are fast and crisp, with a soft base.

As usual, Lenovo has built a typing unit that’s as good as anything else on the market. It’s got a white backlight, too, but there’s no numberpad – though that’s normal on small laptops.

The touchpad is huge, smooth and responsive, with full gesture support. The buttons have a little too much downward movement, but that’s a tiny issue and the full-size USB port makes it easy to add a proper mouse.

This display even has a 120Hz refresh rate with Nvidia G-Sync. In everyday tasks that means you get butter-smooth motion, and it also means you get extra speed if you use the Nvidia GPU to play fast-paced esports titles.

Quality levels are great, too. The delta E of 0.71 is flawless and the colour temperature of 6,540K is similarly impressive – every shade will be perfect. The brightness level of 403 nits is high enough for indoor and outdoor use, and the contrast ratio of 1,259:1 is a great figure for an IPS display.

The Yoga’s display has limits, though, and they hit sooner than other laptop screens. While the Lenovo renders a reasonable 93.7% of the sRGB gamut, it only produces 65% and 66.8% of the Adobe RGB and DCI-P3 spaces respectively – so this screen can’t work in either of those colour gamuts.

The MacBook Pro’s display has a similar resolution to the Yoga, but its 14.2in panel offers better brightness level and P3 gamut support – and the MacBook Air beats the Yoga too. The Surface and Huawei laptops both hit the DCI-P3 gamut with similarly high resolutions.

The Yoga’s screen is good enough for mainstream creative workloads and it’s a crisp, high-quality option for everyday use, but other notebooks are better. The upwards-firing speakers are excellent, with great volume and clarity. Bass could be better, but they’re easily good enough for background music.

There’s no doubting the credentials of Intel’s Core i7-12700H processor: it’s got six high-performance P-Cores that top out at 4.7GHz, and its efficient E-Cores tackle easier tasks at 3.5GHz. There’s 32GB of dual-channel LPDDR5 memory and an impressively quick 1TB SSD, and Nvidia’s GeForce RTX 3050 delivers extra graphics grunt thanks to 2,048 stream processors and 4GB of dedicated memory.

There’s no shortage of computing ability here. In Geekbench’s single- and multi-core benchmarks the Lenovo scored 1,734 and 12,365, giving the Yoga an advantage over most rivals.

The Apple M2 chip deployed in MacBook models scores 1,927 and 8,959 in the same tests, so you get huge gains in creative scenarios. The Huawei’s low-power Core i7-1195G7 only offers half of the multi-core speed.

There’s lots to like about the Yoga’s CPU performance, although it’s not flawless. Subject the silicon to long-term creative workloads and you’ll see its clock restricted to 2.4GHz, which is a long way short of its theoretical top speed.

That’s not a disaster, though: it keeps fan noise modest and external temperatures warm rather than boiling. And even if you only get the Core i7 chip’s talents in short bursts, its still better than its competitors. If you’d like more power, the only answer is a larger notebook.

The Nvidia GPU scored 28,247 in 3DMark Night Raid – miles better than Intel’s integrated cores. It gives you extra power in creative workloads and means you can run esports games like Overwatch and League of Legends at 1080p.

The 70Wh battery is the Lenovo’s weakest component. In a video playback test the Yoga lasted for 11 hours and 9 minutes, but that lifespan declined to 6 hours and 8 minutes in a tougher work test.

Unless you’re careful with how you use this notebook, you’ll have to plug it in before the end of the working day. That results are comparable with the Huawei, but the Surface and both Apple machines last much longer. A thirty-minute charge figure of 41% is reasonable, but that’s the only bright spot here.

It’s best to buy direct from Lenovo’s US and UK sites, where you can choose models and configure their specifications.

If you’d like a Yoga at a lower price, its entry-level model costs $1,595 in the US and £1,229 in the UK. The US model retains its Core i7 processor but halves its memory and storage. The cheapest UK laptop uses a weaker Core i5-12500H processor.

Lenovo also produces a version called the Lenovo Yoga Slim 7 Pro X. It uses AMD processors instead, but the AMD Ryzen 9 6900HS in the priciest model can’t compete with the Intel chip, and the AMD rig doesn’t have Thunderbolt or HDMI ports. It’s not recommended.

Check out our chart of 2023’s best laptops if you’d like to see all of your options.

The Lenovo Yoga Slim 7i Pro X ticks many of the most important boxes when buying a laptop. Intel’s Core i7-12700H means you get more computing and creative power than any rival – even if the slim design means the chip can’t always run at full pelt. The keyboard is reliably excellent, the display is sharp and accurate, connectivity is decent and the laptop is sturdy, good-looking and relatively svelte. You even get an Nvidia GPU.

However, other laptops are slimmer and lighter, and most competitors have brighter screens with broader colours. Apple’s laptops have better battery life, too, which justifies their higher prices.

Lenovo’s laptop delivers ample power, though, and that sole factor makes it worth the price if you need speed rather than battery prowess. It’s a great portable, creative machine.