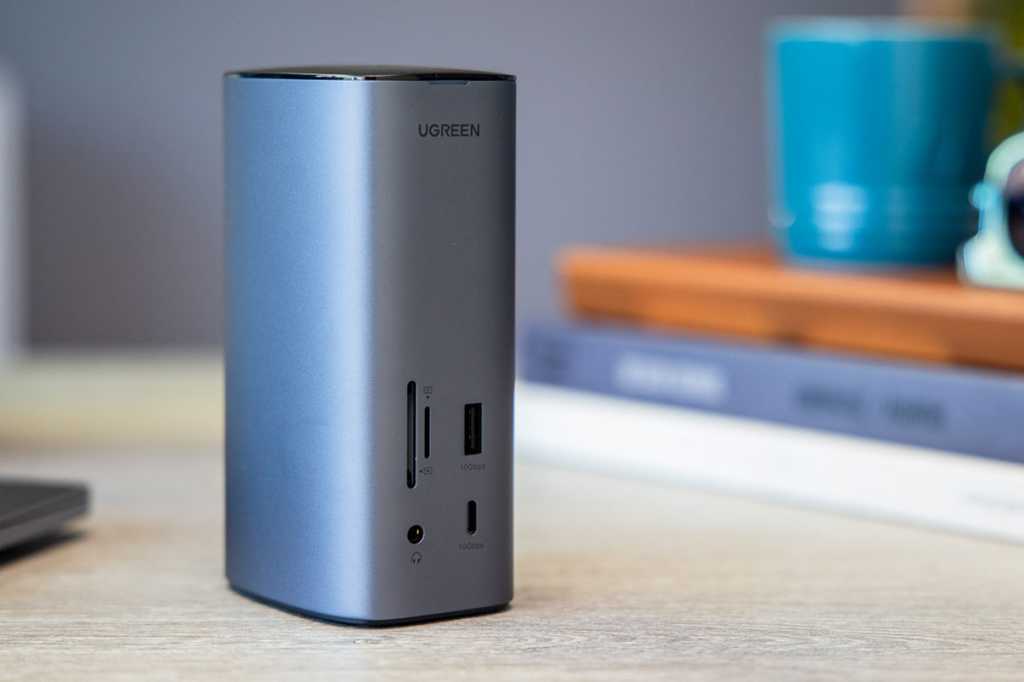 This dock is compact and well-designed, and is priced around the same as comparable docking stations—but note that it requires a USB-C charger for power as it doesn’t ship with a power supply.

Ugreen is a respected maker of premium accessories, especially chargers and hubs, and its latest USB-C docking station offers the same quality, precision and speed.

A fully featured docking station is at heart a charger that also offers multiple port extensions, so Ugreen is expected to deliver the goods, and it does with its 12-port USB-C Docking Station.

It stands apart from many USB-C docks with its three display ports, all of which can be used with Windows laptops and MacBooks—even with the M1 and M2 models that are otherwise limited to one external display.

Ugreen labels its USB-C Triple Display Docking Station as having 13 ports, but one of those is a back-mounted USB-C port that is required for connection to a charger, so it’s really a 12-port dock.

It doesn’t come with a charger itself, which is quite rare for a docking station—most of which come with a separate power supply, with total power potential from 120-230W.

You’ll need to add your own, and if you want to reach the potential 85W laptop charging Power Delivery (PD) on offer here, then your charger should have at least one 100W PD port. Sadly, a 140W PD won’t offer any more as the dock’s input PD is limited to 100W.

You could also use a desktop charger. There are plenty of these with 100W PD ports, and the extra charging USB ports will make up for the fact that this dock’s USB ports are for data transfer only.

Here are the 12 ports on the Ugreen USB-C dock:

Using the HDMI ports and the DisplayPort you can connect three displays simultaneously.

Except for the M1 Max MacBook Pro, Macs don’t natively support three external displays as they don’t support MST (Multi-Stream). Even worse, the plain (non-Pro or Max) M1 and M2 MacBooks are limited to just one external display.

As I have discussed in my How to connect more than one display to an M1/M2 Mac tutorial, there is a software workaround, which entails installing DisplayLink software. This simple fix allows all Macs to support up to three external displays, so the full functionality of the Ugreen USB-C Triple Display Dock is open to all.

Like other triple-display dock manufacturers, Ugreen could make things easier for Mac users by including the link to the DisplayLink software.

There’s also front-mounted USB-C and USB-A ports that can transfer data at 10Gbps, which is speedier than on offer on many USB-C docks.

At the back there are two slower but still reasonable 5Gbps USB-A ports.

It’s worth noting that none of these USB ports—except the upstream USB-C to laptop—can charge connected devices, which is a notable limitation given that most docks offer some device charging from its USB ports.

Alongside those is a Gigabit Ethernet port for fast and stable wired-Internet access.

Back to the front of the dock, are two card-reader slots: one full SD and the other TF (also known as microSD). These are UHS-I, offering 104MBps data transfer. Many docks offer faster 312MBps UHS-II card readers, so if this is important to you, consider an alternative dock; see our roundup at Best USB-C docking stations.

The Ugreen USB-C Triple Display Dock is a vertical docking station in a very compact form for its 13 ports (11 downstream, 1 upstream and 1 to charge the dock).

Its Space Gray color will match darker laptops, and ity won’t stand out on your desk, hidden in the shadows.

We appreciate the power and upstream ports being placed at the rear, with the front ports all sensibly selected.

We also like the power button on the top of the dock—allowing the user to switch off the power to the connected laptop when not in use overnight, helping maintain laptop battery health.

A subtle light under the black top of the dock displays when the dock is powered and connected to a laptop.

This is comparable with similar premium USB-C docks, although the UK price is high. Read our roundup of the best USB-C laptop docks. if your laptop boasts a 40Gbps connection, you might consider one of the best Thunderbolt 4 laptop docks.

Unless you use your laptop’s USB-C charger to power the dock, you will need to invest in a new one as this dock doesn’t ship with its own power supply.

If you need to charge a large laptop, you’ll need a charger with an individual PD port rated at 100W or over so that the dock itself doesn’t drain power from the computer connection. This could add between $50-80 to the overall cost unless you use your laptop’s original charger.

The Ugreen dock is available in the US now and will launch in the UK mid-October.

With its three video ports, the Ugreen USB-C Triple Display Dock is a great choice if you need multiple monitors.

We’d have preferred an independent power supply or a PD 3.1 USB-C input that would allow up to 240W to the dock, plus device charging from the USB ports.

This dock is compact and well-designed, and is priced around the same as comparable docking stations—but note that it requires a USB-C charger for power as it doesn’t ship with a power supply.