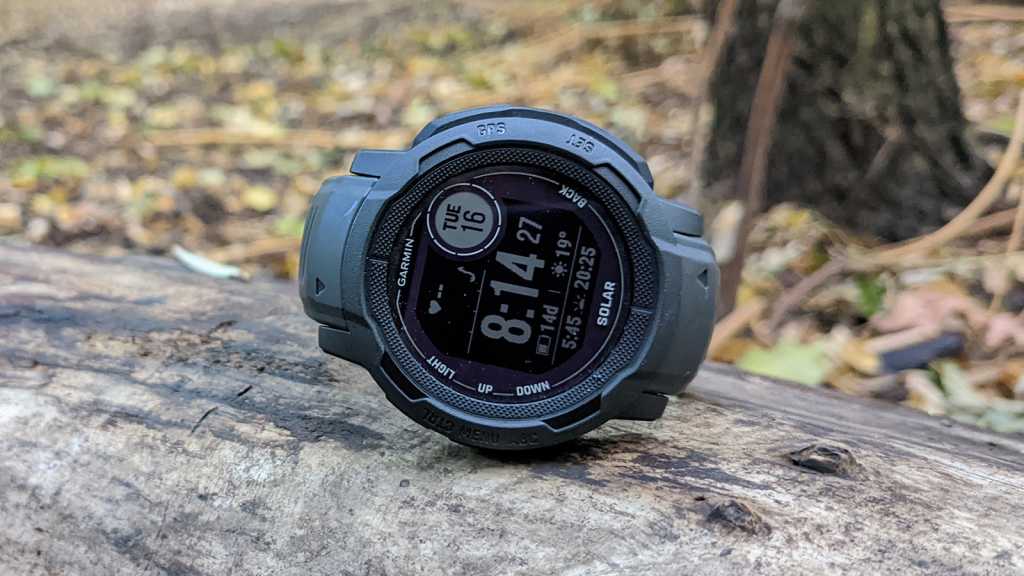 The Garmin Instinct 2 Solar is a relatively affordable gateway into the world of rugged outdoor sports and fitness watches, with incredible battery life and a lengthy list of features.

Garmin is well known for its standalone outdoor GPS gear and great running watches, so it’s no surprise it also successfully combines the two to make outdoor GPS watches.

The company’s Instinct 2 Solar is one of the latest and after having been on my wrist for the best part of three months I can call it a roaring success.

I only had to plug in the charging cable twice in that time thanks to the solar charging feature, which when on holiday in Greece practically kept the battery meter level thanks to all-day sun exposure.

Even away from the sun’s rays indoors (and, let’s be honest, outdoors when in the UK), the watch has superb longevity. It’s a great combination of function over form, with a monochrome display to save power rather than a draining OLED or LCD.

Packed in underneath the basic screen are a huge host of sports tracking and outdoor features on a watch that costs less than an Apple Watch Series 8 in a design that will appeal to sports and outdoor people.

The Instinct 2 Solar in the black version I reviewed is quite subtle despite the rugged, military-esque look. It also comes in a light grey or dark blue if you want the solar feature, though there are a rainbow of colour options if you don’t get the solar one.

The bezel and case of the watch is made from fibre-reinforced polymer that took a bit of a thrashing as wore it every day. The casing still looks pretty immaculate and thanks to a raised lip the glass screen is free from scratches.

That screen uses Corning Gorilla Glass (read: durable) and coupled with the clever memory-in-pixel (MIP) monochrome display technology makes for a no-nonsense set up. MIP screens have very low power consumption, and this one is also transflective, which means it reflects light and uses it to light up the display. It means the watch is easy to read in direct sunlight, unlike smartphones and most smartwatches.

I noticed some wear to the strap loops mostly because my left wrist sits on my desk as I type at my keyboard – not the most outdoorsy way to test durability of a GPS watch, but worth noting.

When I was outside, I was never worried about the rugged build of the Instinct 2 Solar. It has five physical buttons that are easy to press though don’t stick out very far so are a little difficult to accurately press with gloves on.

I found the watch supremely comfortable despite its bulk. It measures 45 x 45 x 14.50mm so sits off the wrist a little way and shares a lot of design traits with Casio’s G-Shock products. At 53g it’s also a little weighty for a smartwatch but I personally go for bold, bulky watches so it didn’t bother me.

Garmin ensures you can wear the thing practically anywhere with a notable 10ATM water rating (anything water based down to 100m, bar scuba diving). For the price, this is an extremely well thought out and hardy design.

The watch is pitched more as an outdoors trekking watch than a runner’s, but it can be used for all manner of activity tracking, running included. I used it to record many runs and found the built in GPS tracking to be extremely accurate, able to log pace and cadence effortlessly. Garmin is renowned for its reliability on these fronts.

I also used it in the UK and on holiday to track my walking routes, and there’s a handy breadcrumb trail feature that drops waypoints as you go so you can follow it back if you stray out of phone signal or can’t call up any maps. For peace of mind, the watch can also pick up GLONASS and Galileo positioning systems on top of GPS to make sure you can always know where you are.

I had a lot of nerdy fun just standing outside and using the watch to quickly record my global coordinates, which you can log.

It’s a little tricky to read it given the display is monochrome, but it works, and it’s nice to know it’s there should you get lost – you just have to remember to set it going in the first place, it’s not automatic.

The heart rate sensor on the underside of the watch is consistent and at this price you can expect it be quite accurate – though if you want full assurance of accuracy with heart rate you should always look to use a chest strap product.

But I love that the Garmin lets me set continuous, once per second heart rate monitoring with seemingly no effect on battery life. As well as this sensor it also has a barometric altimeter, compass, accelerometer, thermometer, and a blood oxygen saturation monitor for top level tracking and read outs.

Walk, hike, and pool swim are the other basic tracking modes, but you can use the watch’s custom menus to add your specific workouts, which range from indoor track runs to triathlon, to golf, bouldering, or fishing. It can automatically record reps in the gym and though can’t auto detect workout, it can automatically pause them if it senses you taking a break.

Most modes will simply track your heart rate but selecting them allows to view specific activity exertion within the Garmin Connect app, which works with iPhone or Android phones.

If you wear the watch 24/7 it can also record your stress and sleep patterns. This is possible because of the outstanding battery life but I found the watch too bulky to wear at night.

An expedition mode can be used that can record a multi-day activity by turning off all sensors and accessories to squeeze the most out of the battery. It records a track point once per hour, to full map your path. This mode promises 32 days of GPS use, with at least 3 hours of sun.

A plethora of other features are also packed in with abnormal heart rate alerts, fitness age calculation, cycle tracking, hydration tracking, and on-wrist workout suggestions. Fully featured is an understatement (full list of features here), and it can achieve it all with just 32MB of onboard memory. It made me question the existence of one-day battery life smartwatches with colour displays and distracting features.

One of the best things about the Instinct 2 Solar is it can ping you with notifications from your smartphone, update you about your workouts, stress, and other metrics – or you can make it entirely silent and stay out of your way.

This is often rare for smartwatches, which are usually designed to capture our attention to make us pull out our phones and spend time on apps.

Though you can get notifications on the Garmin, I turned them off as they are fairly rudimentary, and you can’t reply to anything or action anything on an iPhone, but you can on Android. I sometimes left the phone call notification on though, and the find my phone or find my watch features came in handy.

There’s international support for NFC payments using the watch, but neither of my two banks was supported in the UK so I couldn’t test this out. You can control your music or audio app from the watch, but you can’t load tracks onto it – and there are no third party apps to be had on this operating system.

You can also pick from a few different watch faces. I like the stat heavy ones, and I was able to glance down at my heart rate, heart rate graph for the day, the date, days of battery let, weather and temperature, and sunrise and sunset – as well as the time, of course.

A downside to customising the watch and getting insights from your data is the Garmin Connect app is hard to navigate and has a steep learning curve. It’s all in there, but you often must search through menus several layers deep to find the one setting that is bugging you.

For example, the watch beeped at me after I completed each kilometre of a run with my time for that kilometre – yes please. But in the app, it showed me my run times all in miles. It took me forever to find the setting to change it.

Most of the smartwatch features on the Instinct 2 Solar are nice-to-haves and are best thought of as things you can use if you want, but aren’t the core experience, and are not the main reasons you should be looking to buy one. It excels in tracking, and one other things.

That thing is battery life. I tested the Solar model specifically, which has panels built in behind the screen to take in power from the sun’s rays so you don’t have to charge your watch with the included cable so often.

In three months, I only had to plug it in three times. My indoor desk job meant that’s probably more than you will have to in that period if you work outdoors, or in a very sunny country.

In Greece in blazing 30 degrees centigrade sun, the battery level stayed pretty much constant, dropped only a day or two (as the metre records days left rather than a percentage, such is the long battery life). Back in the dreary UK, it depleted a little. You need at least 3-4 hours of the watch in direct sunlight for it to gain any noticeable solar power.

Even without any sun, a full charge will last about 30 days, though that will be less if you use GPS every day. With sun, the figure can stretch to several more days. A battery saver mode promises up to 65.

Plugging the proprietary-to-USB-A cable into the watch takes an hour or so to top it back up. I went on several trips away without even taking the cable with me.

This is a competitive price for the feature set that pitches itself directly at outdoors people who might want something a little more capable than an Apple Watch, and with a solid month of battery life.

It might not have a colour display, but this watch packs in most things the Apple Watch Ultra can do for about half the price.

You can buy it in the US direct from Garmin or from Amazon or REI.

A smaller 40mm model, called the Instinct 2S Solar, costs the same but I did not test it. If you want to spend less, only want fitness tracking, and don’t need the solar power, I’d recommend the Polar Pacer instead.

The Garmin Instinct 2 Solar may look plain but it is quite an extraordinary fitness and outdoors watch. It packs in a miles-long list of features that will appeal to anyone looking for a watch that can track several activities well thanks to clever on-wrist and app-based software, a ton of accurate sensors, and some of the best battery life I’ve ever seen on a wearable.

Having the solar top up built into a watch that’s under $500/£500 is daylight robbery, and Garmin has done well to pack this much tech into a watch that could be mistaken for one of the more subtle G-Shock models. That said, for the price, it remains an entry-level product of Garmin’s and some people might see the monochrome screen as a downgrade, but in reality, its lower power consumption is the watch’s secret weapon.