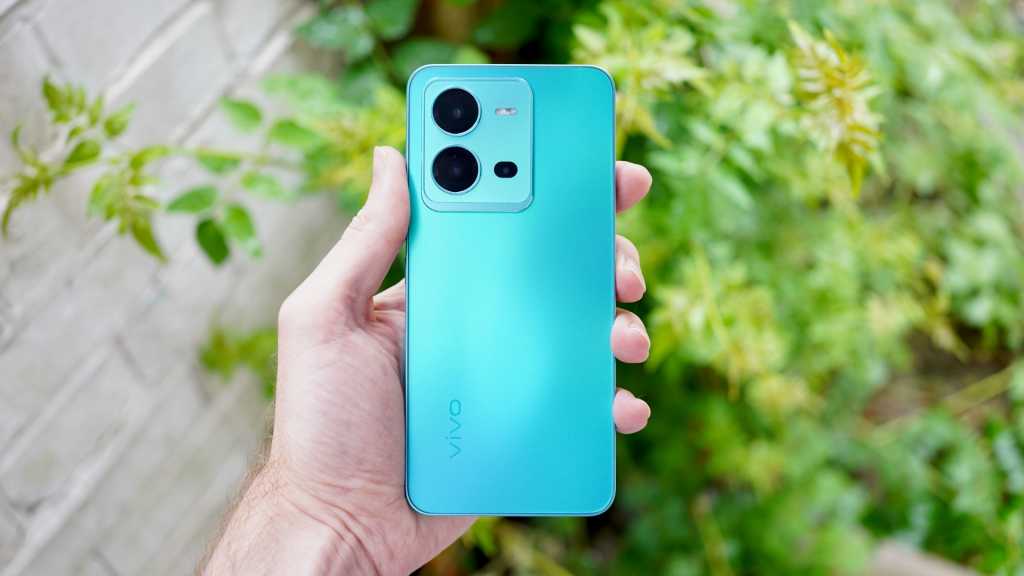 The Vivo V25 is an attractive mid-ranger with an eye-catching colour-changing design and a competent camera, but it falls behind the very best in its class in all the key areas. You can get faster performance, a more colour-accurate display, and indeed a better camera for similar money.

Much like the Vivo V23 before it, the Vivo V25 is a stylish flat-edged mid-ranger with an eye-catching colour-changing design and an unusually advanced selfie camera.

Also like the Vivo V23, we’re not entirely sure whether you’ll be seeing the V25 released in the UK. The Chinese brand has certainly played fast and loose with its global launch plans in recent years.

So is this mid-ranger worth holding out for in a year with so many outstanding – not to mention widely available – alternatives?

The most arresting thing about the Vivo V25’s design is its Colour Changing Fluorite AG Glass rear panel. Sure, you could always specify it in Elegant Black, but that would be boring.

Opt for Sunrise Gold or, as I have here, Surfing Blue, and you’re in for a little magic trick any time the sun rears its head. When subjected to strong UV light, the colour changes.

In the case of my blue model, it switches from light sky blue to deep ocean blue. Block that light from certain sections of the rear panel, and you’ll create a little two-tone pattern on the back of the phone.

Gimmicky? You bet it is. But we’ll endorse any attempt at a fresh design, especially in the affordable phone space. Realme has also adopted this trick for the Realme 9 Pro line, of course, but I’d argue that the Vivo V25 is the better looking phone overall.

Colour-changing ability aside, the Vivo V25 looks quite a bit like the Vivo V23. It’s got the same iPhone-esque shape and flat shiny plastic edges.

I had a bit of an issue with those edges, which had a slightly abrasive ‘cheese grater’ effect to them. Great for tackling rough skin, perhaps, but not conducive to a comfortable holding experience in the long term.

Vivo has done away with the wide iPhone-like notch this time around in favour of a single teardrop notch. Ironically, its resemblance to older cheap phones actually makes this smaller notch seem more dated than its predecessor’s chunkier example.

Another regrettably backwards choice is the single speaker on the bottom edge of the V25. With many mid-range rivals going for proper stereo sound, it feels a little regressive. There’s no 3.5mm headphone jack either, so audiophiles on a budget might want to look elsewhere.

All in all, it’s a handsome design, but perhaps not the most practically inviting on a day-to-day basis.

Another shared element with the Vivo V23 is the Vivo V25’s 6.44in display. That can be considered mid-sized by today’s standards.

Once again, it’s a vibrant AMOLED panel with a 90Hz refresh rate. That’s less fluid than the Poco F4’s screen, equal to the OnePlus Nord 2T’s, and better than the Pixel 6a’s.

It’s a very pleasant display to use, with a reasonable peak brightness (with auto brightness switched off) of 481 nits in the default Normal screen setting, and with clear, punchy colours.

It’s not the most colour-accurate display though, at least in classic sRGB terms. I measured a Delta E of 2.61 when switching to the phone’s supposedly more natural Professional colour mode, which isn’t great. Practically all of its mid-range rivals get much closer to the ideal figure of 1 or below.

If you prefer, stepping up to the Vivo V25 Pro will get you a 6.56in AMOLED screen with a 120Hz refresh rate.

As mentioned already, you get a single downward-facing speaker with the Vivo V25, which is a bit of a disappointment. It’s clear and loud enough, but it lacks low-end oomph and, obviously, proper stereo separation.

The Vivo V25 runs on a MediaTek Dimensity 900 chip. Curiously, this is actually a downgrade on the Dimensity 920 of the Vivo V23.

There’s a choice of either 8- or 12GB of RAM, which is ample in both cases. But that processor downgrade is regrettable. It doesn’t represent a huge step back in performance – these are two very similar chips – but a step back it is nonetheless.

Perhaps more concerning is that the Vivo V25 has fallen even further behind its mid-range rivals. An average Geekbench 5 multi-core score of 2069 falls only a little short of its predecessor, but massively behind the Pixel 6a, OnePlus Nord 2T, and Nothing Phone (1).

It’s a similar story across each of our GFXBench GPU tests, with the Vivo V25 coming up well short of the best mid-rangers on the market.

In terms of storage, there’s a choice of either 128- or 256GB, and there’s no potential for expansion. That’s pretty much par for the course for a 2022 mid-ranger.

While the Vivo V25 disappoints in performance terms, it at least partially makes up for it in the camera stakes.

Its 64Mp main camera is capable of shooting bright, crisp, well-exposed shots in good lighting, and pretty decent results when the light drops to boot.

That’s aided by the welcome addition of OIS, which was notably lacking in the Vivo V23. It makes the Night mode capable of capturing sufficiently clear shots, unlike its predecessor.

Don’t get me wrong, this still isn’t as impressive a camera system as the OnePlus Nord 2T with its huge flagship-esque main sensor, or the Pixel 6a with its top-grade image processing. But it’s still a solid performer in most areas.

There’s also an 8Mp ultra-wide camera here, but it’s not particularly great. Detail and dynamic range aren’t up to the main camera’s standard, and I noticed a fair amount of noise in the skies that I captured. It’s the usual deal with cheaper phones, essentially, as is the inclusion of a borderline useless 2Mp macro camera.

The selfie camera is pretty strong though. It might have lost the Vivo V23’s secondary sensor, but the single 50Mp camera is still more than capable in good lighting, helped by a wide f/2.0 aperture. We’re talking about plenty of detail and decent exposure here, just stay away from those awful beautifying effects.

It’s another solid performer that will comfortably get you through a full day. On a 16-hour day of moderate usage, with three hours and 10 minutes of screen-on time, I found that I was left with 57% left from a full charge.

In other words, the Vivo V25 will last you a day of intensive usage, and potentially two full days of lighter usage. This basically matches mid-range rivals like the OnePlus Nord 2T.

In the PCMark Work 3.0 battery test, the Vivo V25 lasted 12 hours and 5 minutes. That’s just a little better than the Vivo V23, and much better than both the Nothing Phone (1) and the Samsung Galaxy A53.

That’s better than the Pixel 6a and the Nothing Phone (1), neither of which come with a charger in the box, but it falls well short of the OnePlus Nord 2T with its 80W charger. Still, it should be fast enough to satisfy most customers.

There’s no wireless charging, but that’s not unusual for a mid-ranger. The Nothing Phone (1) or the creaky old iPhone SE are your only bets if you count this as a requirement for your hard-earned cash.

The Vivo V25 runs on Android 12 out of the box, but its custom Funtouch OS 12 continues to sell the overall package short.

I appreciate that my test model is not immediately headed for the UK or European market, so the provided software bundle is unlikely to be exactly what a western audience would get. The likes of Lazada, Shopee, and Viu, for example, are intended for the Malaysian market.

Leaving pre-installed apps aside (and the likes of TikTok, Netflix, Facebook, Twitter, and LinkedIn would likely appear in a UK model as they do here), the look of Funtouch OS 12 simply hasn’t kept pace with Google’s Material You improvements.

There is now at least a system in place to match the UI colours with the colours of your chosen wallpaper, though it lacks the full nuance of Google’s Android 12 system. Otherwise, I’d generally file Funtouch alongside Oppo’s ColorOS, Xiaomi’s MIUI, and Honor’s Magic UI. Not bad exactly, but a bit meh.

We haven’t heard anything about any firmware update guarantees either, which leads us to suspect there won’t be many.

The Vivo V25 is out now in 20 territories across Southeast Asia, South Asia, Latin America, and the Middle East. There are no firm plans to release it in the UK or Europe, however.

Based on previous models, we won’t be holding our breath. The Vivo V21 5G did eventually turn up in the UK, but only at the end of 2021, while the V23 5G only turned up in mainland Europe.

When the Vivo V21 5G landed here in the UK, it was priced from £399, which might be a decent indicator of where the Vivo V25 might fall if it ever did make its way west. That would pitch it right up against some formidable competition in the Pixel 6a, the OnePlus Nord 2T, the Nothing Phone (1), and the Samsung Galaxy A53 5G.

Check our chart of the best mid-range phones for more options.

Like its predecessor the Vivo V23, the Vivo 25 is a competent all-rounder with a particularly eye-catching colour-changing design. And akin its predecessor, that’s simply not good enough to raise it to the top of an increasingly competitive mid-range market.

Rivals such as the Pixel 6a, the Nothing Phone (1), and the OnePlus Nord 2T all offer significantly more impressive performance and more colour-accurate displays, not to mention more impressive camera systems. And likely, longer software support as well.

Given the lack of firm UK and Europe release plans for the V25, Vivo may itself have concluded that picking a fight with such titans is unwise. Even if you do see the phone appearing in your region, however, you should know that while it’s far from a bad phone, you can do better for the money.