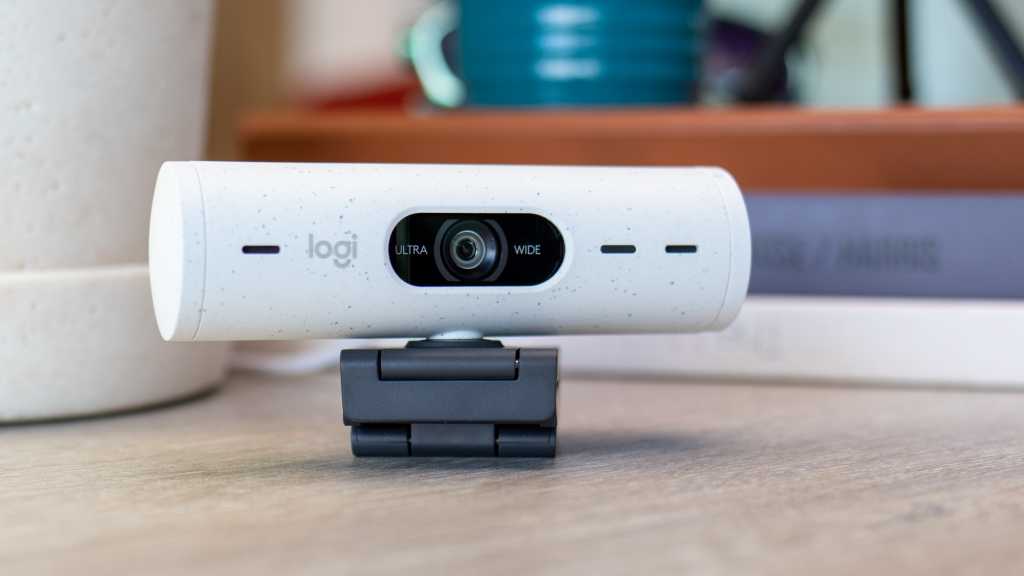 Logitech is expanding its tech offering for those working from home with the launch of a new webcam, the Brio 500, alongside a pair of headsets, the Zone Vibe 100 and 125.

The $129/£129 Brio 500 webcam is a thoughtful update that’s a little less business-like in design than Logitech’s other webcams, borrowing a bit from the streamer-focussed StreamCam.

It’s cylindrical in shape, and with a choice of off-white, graphite, or rose finishes it’s not as bluntly functional as some of the other options out there. Basically, it’s a webcam that you might not mind staring at all day while it sits just above your display. If there’s a complaint about the look, it’s only that as a whole it’s a little large.

The new shape also allows for a slightly novel privacy shutter. Logitech has included a physical, plastic lens cover, which you can rotate into place by twisting the webcam’s end cap – so you can trust that the camera can’t see you when you don’t want it to. The cap twists into place with a satisfying clunk, and is perhaps my favourite bit of the Brio.

The camera itself is an ultrawide using a new 4Mp sensor, and video quality is for the most part impressive – with the caveat that it’s limited to 1080p, not 4K. If you’re mostly using it alone at a desk you’ll usually want to zoom in so that you fill the frame, but even cropped like this there’s a decent amount of detail. Dynamic range and white balance could be improved – this isn’t Twitch quality – but you’ll look good enough for your next Zoom call.

There are a couple of extra neat software tricks too, built into the official LogiTune app: Show Mode sees the camera automatically invert if you twist it down to face your desk, so it presents a PoV shot of whatever you might want to show off. The software side of this works well, but the hardware lets it down a little: the magnet holding the webcam in place isn’t quite strong enough, so you’re more likely to pop it out of the stand entirely than tilt it down to point at the table.

Meanwhile Right Sight is the now-standard mode that widens and crops the image as appropriate to appear to follow you around the room or include extra people in shot, though this wasn’t quite ready for me to test yet.

Alongside the Brio 500 Logitech is also launching a pair of Zone Vibe headsets, which take the same design approach as the Brio and launch in the same colours – the aim is apparently to produce a ‘hybrid’ headset that’s you’d be just as happy to use for Zoom calls or to wear out for tunes on the train.

The standout feature is how lightweight these are – at just 185g they seem comfortable enough that you might not mind wearing them all day long, helped by the fabric and memory foam ear cups. And with up to 20 hours of battery life they won’t die in the process.

They’re mostly eco-friendly too: the headband is made from 100% recycled PET fabric, and the rest of the body uses 25% post-consumer recycled plastics.