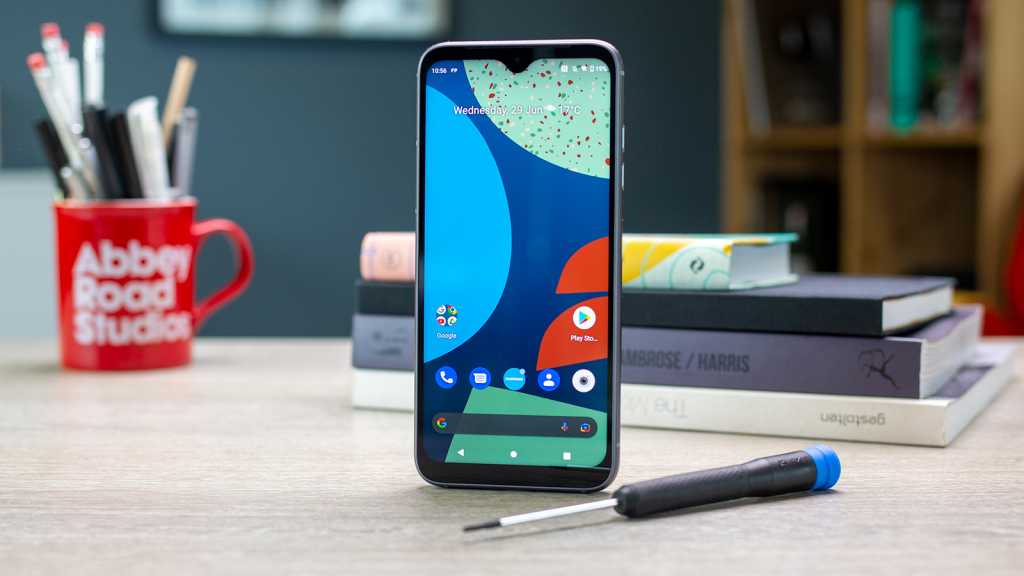 The Fairphone 4 is not only the most ethical smartphone purchase you can make, it’s also a perfectly solid mid-range device that is designed to last at least five years.

More than 80% of the world’s population owns a smartphone. Unfortunately, most of those smartphones are manufactured via unethical and unsustainable means.

The Fairphone 4 is the fifth phone from the Amsterdam-based company (there was a Fairphone 3+). It’s a mid-range device with a slightly higher price than you might expect, but that extra money goes towards supporting the start-up and helping it ensure its supply chain is ethically sound.

The great news is the Fairphone 4 is also a pretty good phone, not something we could

Fairphone says the phone is made from materials from “sustainable and fairer sources”, using recycled plastics, and Fairtrade certified suppliers.

It’s a relatively large and chunky device at 10.5mm thick – for comparison, the iPhone 13 is 7.7mm thick. It’s a large phone too thanks to its big bezels and sizable screen.

This extra heft is down to the modularity of the Fairphone 4. You can take the back cover off and take out the battery, just like you could on phones ten or more years ago.

There are also screws in the attractively and accessibly presented innards that you can unscrew to methodically take the phone apart bit by bit. This is so you can replace parts as the phone ages and things break – a new battery, camera, earpiece, loudspeaker, USB-C port, even display – all these part and more are available to buy from Fairphone should they wear out, encouraging you to keep the phone longer and fix it yourself.

I took the phone completely apart and put it back together again. It’s easy to do, though you’ll need to buy a PH00 standard screwdriver (you can get one on Amazon for less than $5/£5/€5).

I reviewed the grey model, but you can choose a green, or speckled green version (the latter looks the best). There are two cameras on the back in a subtle attractive triangular formation with a time-of-flight depth sensor the third circle in the module.

On the right edge is the power button that doubles as a reliable fingerprint sensor, with two volume buttons above it. Other than that, there’s a USB-C port and speaker on the bottom.

Despite its modularity and fixability the Fairphone 4 feels like tank, with rubberised case and plastic sides somehow combining to feel quite rugged. It’s not the most premium feeling device, but it’s the best made Fairphone so far. That modularity does mean it’s not fully waterproof though, with an IP54 rating for dust and water resistance.

The Fairphone 4’s 6.3in LCD display is perfectly decent but one of its weaker points if you want the best screen possible at this price. But it also seems slightly redundant to compare the phone to other phones in the mid-range because it’s built upon a completely different business model and set of principles.

Yes, you can find a phone with a better 120Hz OLED display rather than the Fairphone’s slightly dull 60Hz LCD. But the former device won’t have been ethically sourced from supplier all the way to you, which is surely why you are interested in buying from Fairphone in the first place.

It’s not the best panel out there but it is perfectly fine for every normal smartphone thing – videos also look crisp thanks to the solid 2340 x 1080 resolution, and it gets plenty bright. But it does oversaturate colours, and other 60Hz phones cope better than this one with ghosting (the appearance of blur when scrolling through text).

There are quite thick bezels at the top and bottom of the screen, including a teardrop selfie camera in the centre at the top. Above that is the earpiece, which along with the bottom firing speaker can produce adequate audio for video calls or watching YouTube, but they are not the best quality and most of the time you’ll want to reach for some Bluetooth headphones.

The phone runs on Qualcomm’s Snapdragon 750G 5G chipset, which is probably my main worry. For a device that asks you to keep it for as long as possible, the chip is one component you won’t be able to replace or upgrade. It also allows for 5G via a physical or eSIM, or one of each simultaneously.

In 2021 at the phones release and now in 2022, it’s a fine mid-range chip that performs well. High-end games drop frame rates in some places but largely I had no issue using the Fairphone 4 as my main phone on the daily.

But in four or five years, the 750G will be showing its age, and might not perform as well as today’s high-end chips will in that time. If you don’t tax your phone much it won’t matter, but it’s worth bearing in mind if you care about performance as much as sustainability and the ethics of where your tech comes from.

I tested a unit with 6GB RAM and 128GB storage, but you can also get an 8GB/256GB model. I’d plump for the latter as the extra RAM will keep the system performant for longer and you’re less likely to fill the phone’s memory over several years.

In benchmarks, it performed at a similar level to the OnePlus Nord CE 2 Lite and Samsung Galaxy A53.

The Fairphone 4 can charge at 30W speeds with a wired USB-C charger, but it does not come with a charger brick or cable in the box, in line with its eco-friendly image. It sells these accessories for £31.95 and £21.95 respectively in the UK, though that first price is incredibly expensive for a USB-C cable, even if it is designed to last as this one is.

30W is not as fast as many other Android phones can charge, but it’s faster than most Samsung smartphones that top out at 25W. If you have a USB-C charger already, it’ll charge the Fairphone 4 just fine. I tested it with several slow and fast chargers, and it worked as expected, charging up to 41% in 30 minutes with a 30W fast charger. There’s no wireless charging here.

Battery life was solid in my everyday use, lasting to the end of each day and usually into mid-morning of the next. That was with the heavier usage for a review of lots of screen time and photo taking, video calls, and gaming, so I’d expect little battery anxiety for the Fairphone 4 in regular use.

The 3,905mAh cell is not the largest, but you can of course buy another for £25.95 from Fairphone and carry it as a spare for that long weekend away from a plug socket.

The Fairphone 4 packs in two identical 48Mp camera sensors for its main and ultrawide lenses. This means colour between the two is fairly consistent but the sensors themselves aren’t the best, and the photos from both lenses is fairly middle of the road.

They tend to oversaturate colours when at their best in bright sunlight, and they struggle in low light to capture detail. But they are a world better than cameras on previous Fairphones, and the 25Mp front facing camera is surprisingly great and can record in 1080p at 30fps.

The main rear camera can record in 4K at 30fps, making the Fairphone 4 a more than adequate photo and video machine for the price – it’s just nothing special in the advanced world of smartphone camera tech.

If Fairphone can deliver on its software support promise, then it’s as good a reason to buy the Fairphone 4 as its eco-minded crednetials. Released in September 2021, Fairphone says it will support the device with software and security updates for five years until 2026.

It says this will include platform updates to Android 12 and Android 13, and possibly 14 or 15. This is more than is offered by much larger companies like OnePlus and Honor and is a feather in Fairphone’s cap.

I’d hope it can at least provide five years of security updates to keep the phone protected against the latest threats, but the plan does highlight that if you buy the Fairphone 4 it is two Android generations behind – stuck on Android 11 when Google is on Android 13. It’s sometimes difficult for smaller firms to support devices for as long as Fairphone is promising here, and we will only find out over time if it can stick to it.

The appearance of the Android software on the phone is very basic, and as close to ‘stock’ Android as you can get. If you don’t care about the latest Android features like theming and fancy graphical flourishes, then you won’t be missing out.

This is a, you guessed it, fair price in my opinion for the value both offer – both in the product’s ethical credentials and the Fairphone’s software support promise.

Should the company be able to keep all the Fairphone 4’s spare parts in stock, you could realistically be using this phone until the tail end of the decade if you look after it. That’s not something you can say about many smartphones in 2022.

You will just have to be happy to lose high-end tech specs in the name of ethics and sustainability. This is what you’re paying for, and there’s little point in comparing the Fairphone 4 to, say, the cheaper Google Pixel 6a, because their prices are quite different for many more reasons than a spec sheet can tell.

The phone was originally released in September 2021 with an unprecedented five year warranty. The company told me this is still the case if you buy a new Fairphone 4 on or before 31 December 2022. After that, the warranty will be four years, and then three years for any phone bought in 2024. After this, a two year warranty will apply.

For this reason, I recommend only buying direct from Fairphone as opposed to a reseller.

The Fairphone 4 is the best Fairphone yet by miles and a very solid smartphone in general. If the company can keep spare parts in stock and stays true to its five year software promise, it will be hands down the most ethical and sustainable phone you can buy now and for the next few years.

It’s the best way to own a decent new smartphone while supporting an ethical supply chain, though you could also promote sustainable smartphone use by buying a second hand device from another manufacturer.

But if Fairphone’s mission appeals to you, and you don’t mind using a phone with mid-range specs and hardware for the next few years, I don’t hesitate in recommending it.