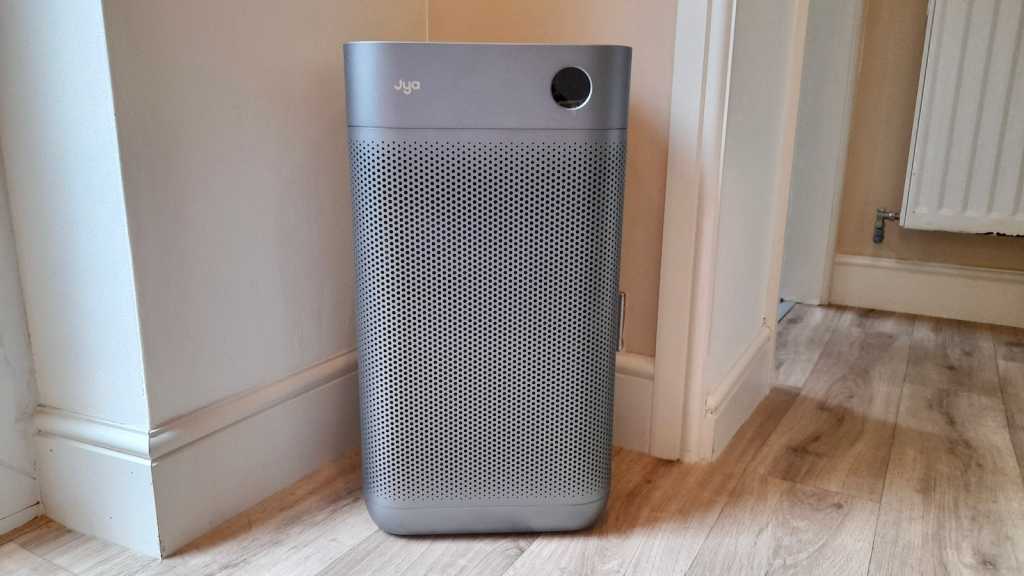 Alex Greenwood / Foundry
At a glance

Simple to set up and use with a super quiet sleep mode, the Jya Fjord Air Purifier combines great design with movability.

The Fjord is an air purifier with style. It’s made by Jya, part of Smartmi, which is a Xiaomi company. It’s gunmetal grey with a chrome trim around the fan grille. The air inlets are circular, the touchscreen control panel is circular, and the rounded corners give it a smooth and more organic look.

Standing at 53.5cm, the Fjord doesn’t have handles, and weighs about 14.3lb, (6.5kg). Because of this, it is tricky to lift, so Jya has popped the whole thing on 360-degree wheels, very similar to the ones you get on wheelie suitcases.

The black cable, with an integral plug, sprouts from the bottom of the purifier. It’s 170cm in length, which is typical for a purifier of this type.

All about the filter

Jya says the Fjord removes 99.99% of harmful air contaminants and neutralises viruses and bacteria in minutes.

It has a four-stage purification process. The first layer is a pre-filter for hair and dust mites. The second layer is a HEPA H13 filter for airborne particles such as dust, pollen, mould spores and bacteria. The third layer is activated carbon for smells and harmful gases, such as tobacco smoke and formaldehyde. To top this all off, there is UV sterilisation to kill bacteria and viruses.

The filter itself is a hollow cylindrical unit that fits into the body of the purifier. You take off the top of the purifier to access it, and it is 4cm in thickness. It is a substantial bit of kit at 26cm long and 22cm in diameter, and accounts for about 3lb of the unit’s overall weight. Be careful replacing the top of the unit though, it clicks back in quickly and could catch the skin on a finger.

Inside the box, you’ll get the purifier, a power cable, and a user manual. To set up the Fjord initially, just plug it in and turn it on. It will beep, the display will illuminate, and the purifier will start working.

The control panel is a touchscreen and requires a bit of figuring out. When you first turn the Fjord on, it will cycle through three displays: PM2.5, PM10, and TVOC.

The Fjord displays PM 2.5 numbers from 001 to 999 to show you the level of small particles in the air. The PM10 and TVOC interfaces are each a four-stage band from excellent to unhealthy: PM10 is a dotted band, while TVOC is a band of wavy lines.

If you press this main display interface, you can quickly switch to the four operation modes: sleep, favourite, power or automatic.

Sleep mode is the very quiet mode. Regardless of the air pollution level the Fjord registers, it will continue to operate on a low speed. You set the favourite mode through the Smartmi app, defining the coverage area and the purifying efficiency.

Power mode allows you to set the purifier to run at maximum speed with maximum output. Automatic mode sets the Fjord to automatically switch fan speeds according to the air quality. And if you swipe right on the touchscreen, you’ll see a temperature and humidity display.

Swiping left accesses five further display screens: the first displays operation mode options in a different way, the second shows the filter’s remaining life span, the third allows you to adjust the screen brightness, the fourth allows you to rest or disable Wi-Fi settings, and the fifth allows you to turn the UV light on and off.

Jya states that the Fjord takes “8 to 15 mins to purify your living space”.

We first tried the air purifier on power mode and were impressed. We could feel air movement from five feet away, and judged the sound level to be roughly equivalent to a domestic hair dryer.

Then we tried automatic mode and tested the impact of vaping in a small room. Fascinatingly, within eight seconds, the PM2.5 display went suddenly to 74 and red, the air purifier turned onto a high fan speed, then the indicator began to count down through yellow to 020 on green – the process took maybe ten to twenty seconds.

The sound volume varies depending on what the purifier thinks is the appropriate fan speed for the level of pollution in the air.

The sleep mode was remarkable though; the sound was lower than that of a desktop computer. Jya calls this noise level “18.8dB(A)* Whisper Clean”, and we found that to be more than accurate.

The Fjord is smart-enabled and works with Homekit, Google Assistant and Alexa. However, the manual does not carry very clear directions for downloading the relevant app, so a bit of trial and error – and prior skills and knowledge of smart technology – is necessary.

The Fjord uses the Smartmi app, and you need to download it from either Apple or Google Play. The QR code in the manual will direct you to the correct place.

Once you’ve installed the app and opened it, it’ll find the air purifier automatically. It took less than a minute in our test. It then asked for our WiFi password and began to connect to the Fjord.

It took a couple of tries to get the app to connect.

Once found, the Fjord appears in the home screen of the Smartmi app and you can turn it on and off from here. Pressing the image of the purifier leads you through to a further screen that displays the three measures: PM10, TVOC, and PM2.5, and gives you a general status for each.

If you press the TVOC or PM2.5 icons, it takes you through to a graph view, and you can choose to see measures for the day, week or month.

The swipe band below the image of the Fjord allows you to turn the purifier on or off and set the mode. There are four modes that you can access from the touch screen on the unit, but there’s also a manual mode where you can move a slider up and down to choose the fan speed for a specific space in m2 – we presume this setting is what becomes the “favourite” mode on the Fjord’s touchscreen.

You can then, from this point, connect to Apple Homekit, Google Assistant or Alexa.

For those who are less confident with technology, this process might be a bit much, so you might be left relying on the touchscreen on the air purifier and would have no ability to remotely control the device.

The Fjord is a 48W appliance. This is roughly average for a purifier of this type; the power consumption is roughly similar to a small laptop or Sky box.

You’ll also need to factor in the cost of replacement filters. Jya estimates that they should be changed roughly every six months. And they’re not cheap, priced at $59 in the US or €59 in the UK and Europe.

In the UK and Europe, you can only buy it directly from Xiaomi or from the Jya website, for €369.

Stylish and easy to move, the Jya Fjord air purifier ticks a lot of boxes. The filtration process is four-stage and includes UV, the automatic mode is impressively reactive, and you get a lot of information about room air quality.

Although some people may find navigating the purifier’s touchscreen and downloading and using the app to be tricky, the Jya Fjord is a good choice for an air purifier if you are comfortable with setting up smart devices and happy to use them.