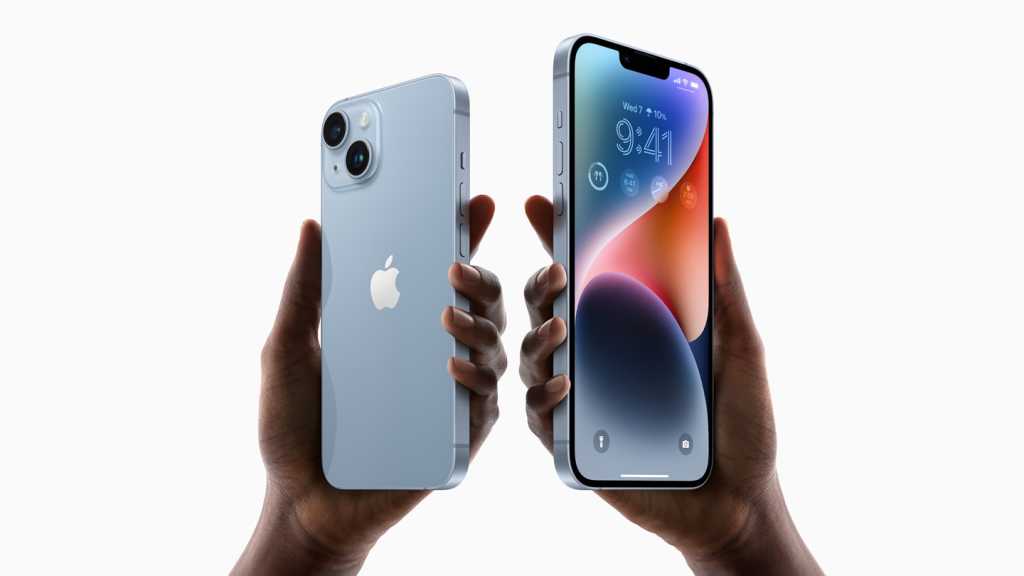 The iPhone 14 range is official, and it’s available to buy around the world right now – well, three of the four new models anyway. The big change with the range is the replacement of the small-screen iPhone mini with a 6.7in iPhone 14 Plus, offering consumers a cheaper way to get a big-screen iPhone.

The iPhone 14 and 14 Plus offer improved rear camera performance, particularly in low light, along with new car crash detection functionality and satellite connectivity for emergencies, though it sports the same A15 Bionic as last year’s Pro models.

For the bigger upgrades, look to the iPhone 14 Pro and iPhone 14 Pro Max. The iconic notch has been replaced with a Dynamic Island which takes the new pill-shaped cutout and blends it with software, displaying icons and changing shape depending on the action. There’s also a much-improved camera setup, the same satellite connectivity as the iPhone 14 and the introduction of the top-end A16 Bionic too.

If you’re interested, here’s everywhere you can buy the iPhone 14 range in the US and UK right now.

When will the iPhone 14 range be released?

The iPhone 14, 14 Pro and 14 Pro Max ship are now available to buy following release on 16 September, but those that want the standard 6.7in iPhone 14 Plus will have to wait until 7 October for delivery.

How much does the iPhone 14 range cost?

Here’s a complete pricing breakdown of every model of iPhone 14 available:

Where to buy an iPhone 14 SIM-free

When it comes to buying an iPhone 14, your first port of call is likely the Apple Store. After all, the company has the most available stock of all retailers – though some popular third-party retailers and carriers in the US and UK also offer the ability to buy, and some even have deals, be it an extended warranty or a discount.

We’ve listed everywhere you can buy an iPhone 14 now, and we’ll update the list as retailer listings continue to go live over the coming weeks.

Where to buy an iPhone 14 on contract

If you’re looking to get an iPhone 14 or iPhone 14 Pro on contract, you’ve got plenty of options in the UK and US, with some impressively competitive deals – especially for those in the US.

Are there any trade-in deals for the iPhone 14 range?

There are a few trade-in deals for the iPhone 14, offering a decent chunk of money off the next smartphone – though it’s US consumers that get the biggest and best deals right now.

The biggest deal is from US carriers, with AT&T, Verizon and T-Mobile/Sprint offering up to $1000 off the iPhone 14 collection by trading in an eligible iPhone when taking out an eligible plan. Apple itself is also offering a trade-in deal, though with only a $40-$720 credit depending on your smartphone.

Apple is also offering a trade-in program in the UK, with Brit iPhone fans able to get between £30-£625 of credit towards the new iPhone 14 range depending on the smartphone being traded in.

Vodafone is also offering an interesting trade-in deal with the iPhone 14 range, though it doesn’t get you any money off your new iPhone 14 contract.

The iPhone 14 range wasn’t the only product Apple revealed at its September event; the company also announced the Apple Watch Series 8, Apple Watch Ultra, Apple Watch SE and AirPods Pro 2. It was certainly a packed show!