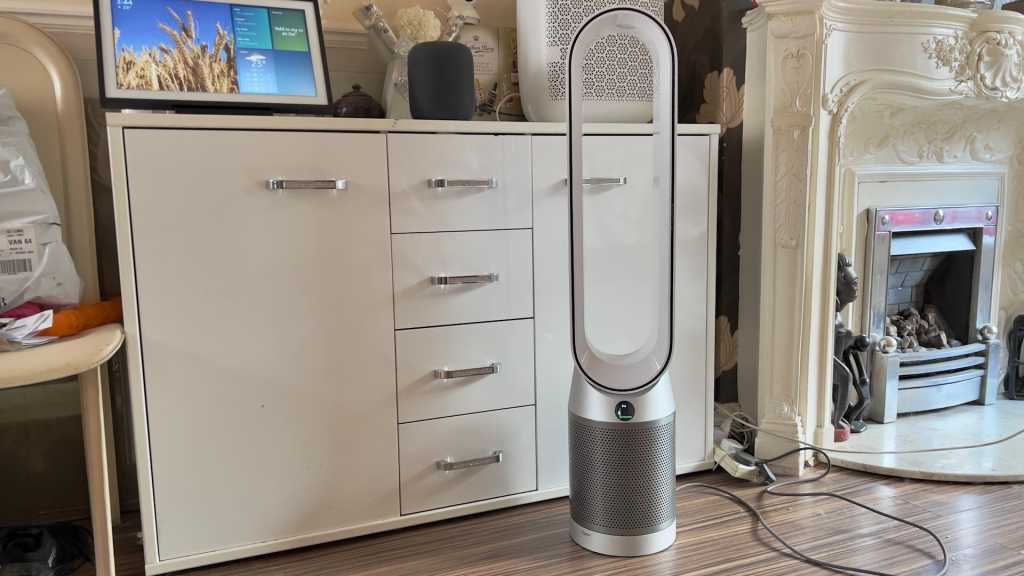 The Dyson Purifier Cool Autoreact is very much a premium air purifier, but it does an excellent job at both purifying and cooling the room, and it’s much quieter than alternatives. It does lack smarts though, a surprise at such a premium price.

Dyson has been a long-time player in the fan market, and in recent years, it has begun tackling the issue of air purification. It makes sense – if the fan is already circulating air, why not clean it at the same time – and amidst rising air pollution levels, it’s something consumers are more aware of than ever.

The Dyson Purifier Cool Autoreact looks to both cool and purify the air in your home, with an impressive filtration system and built-in sensors providing real-time data on the air quality in your room. The question is, is it worth its premium $549.99/£499.99 price tag? Well…

The Dyson Purifier Cool Autoreact is very much a Dyson fan, following the same design philosophy as the rest of Dyson’s bladeless fan collection. Its sleek, distinctive design is certainly more premium than most competing fans and air filters, with a white and silver colour scheme that wouldn’t look out of place in an ultra-modern living room.

It’s taller than some might expect, measuring in at just over 1m (1050mm) tall, though the relatively small 220 x 204mm footprint means it doesn’t take up too much space overall.

It sits on a swivelling base that allows you to angle the air purifier wherever you’d like, with options to set rotation at anywhere between 45- and 355 degrees to cool an entire room. The rotation isn’t quite as precise when rotating the fan yourself, clicking into place every 10-15 degrees, but you can easily lock it into place using the bundled remote control.

Beneath the iconic bladeless loop, you’ll find a familiar silver cylinder with a smattering of small holes that let the Dyson Autoreact draw in air from the environment. This is for more than simply circulating air – it features a large air filter within that’s simple to install – but more on that in a minute.

You’ll find a circular LCD display that sits on the front of the cylindrical base, providing at-a-glance information not only about the current fan speed settings but all kinds of metrics on your current air quality.

This is particularly important with the Purifier Cool Autoreact as, unlike competing air filters like the Zigma Smart Aerio 300, there’s no smartphone companion app. Instead, you can use the remote control, which magnetically snaps into place on top of the filter, to cycle through various screens to get a breakdown of air quality, humidity and temperature.

Those that want onboard smarts will have to opt for the (even more premium) $519.99/£549.99 Dyson HEPA Purifier Cool Formaldehyde Purifying Fan.

The issue is that, much like with other Dyson fans, the design comes first – and that means there’s a lack of onboard controls. There’s a power button, but that’s about it. Practically every single function has to be enabled via the remote, and if you lose it, you’ll lose access to most of the functionality on offer. Buttons to control oscillation and rotation would’ve been nice, at the very least.

The main features of the Dyson Purifier Cool Autoreact are in the name; it’ll not only cool the air, but purify it using its suite of built-in sensors and an advanced filtration system.

As such, the Dyson Purifier Cool Autoreact does a very good job of cooling the air in the room. It does this using Dyson’s patented air multiplier technology to funnel air in front of the fan for a consistent breeze, and with 10 fan speeds to choose from, it ranges from a gentle breeze to a powerful stream of cooled air. The airflow is relatively narrow too, meaning it won’t blow nearby papers out of the way if it’s pointing at you.

It’s not quite as intense as a regular desk fan at maximum speed, but it’s more comfortable for all-day use.

Of course, it’s not just about cooling down – though that is a very handy feature during hot, sticky days. The key feature of the Dyson is its air purifying capabilities, and more specifically, the ability to automatically ramp up or down depending on the current air quality levels in your room.

It sports a replaceable glass fibre HEPA H13 filter that, combined with Dyson’s tech, can filter gases including VOCs and smelly odours from the air, as well as 99.95% of particles as small as 0.1 microns. It’s not just the filter that’s designed to the HEPA H13 standard either; the whole chassis meets the standard to keep trapped pollutants within, stopping them from releasing back into the air over time.

It’ll switch the on-screen information between PM 2.5, PM 10, VOC and NO2 depending on what’s detected in the air, always giving you key information at a glance. The air quality levels can be displayed in the form of a colourful graph or simply by numbers – I prefer the latter to see exactly how good or bad the air quality is in the room, but each to their own.

What differentiates the Dyson Purifier Cool Autoreact from other air purifiers in the market is the company’s air multiplier technology, which helps create circulation in the room and direct pollutants in the air back toward the filter for better performance. In fact, it’s able to generate up to 290 litres of purified air per second, making it ideal for purifying both small and large rooms fairly quickly.

You can either set the Autoreact to, well, automatically react to pollutants in the air, but you can also overwrite it with your choice of fan speed. The more powerful the fan the quicker it’ll clean the air, but the airflow will also be much more powerful and potentially disturbing depending on what you’re doing, though there’s a diffused mode that’ll divert the air to the rear of the fan if needed.

Despite the combination of air purification and cooling, Dyson has somehow also made the Dyson Purifier Cool AutoReact 20% quieter than its predecessor, and that’s immediately noticeable in use. Even at higher fan speeds, I never felt the need to turn up the TV to drown out the hum as I did with cheaper air purifiers I’ve tested.

That’s particularly useful when used at night in conjunction with the dedicated night mode, providing a gentle breeze with no disturbance to your sleep. It’ll also turn itself off after a predetermined amount of time – got to keep those energy bills down, right?

As you might expect from a Dyson product, it’s not the cheapest air purifier on the market at a cool $549.99/£499.99, though the impressive air purifying capabilities and high-end design could make it a tempting purchase for some. It’s certainly a better performer, and slicker, than the likes of the $169/£145 Zigma Smart Aerio 300, so you do tend to get what you pay for.

If you’re tempted, you can buy the Dyson Purifier Cool Autoreact from Dyson itself alongside key retailers including Best Buy in the US and John Lewis in the UK. To see how it compares to the competition, take a look at our selection of the best fans.

The Dyson Purifier Cool Autoreact is a high-end purifier/fan combo, and the price tag reflects it. If you’re looking to simply purify your air on a budget, the Dyson probably isn’t for you – but if you’re looking for a high-performance purifier that not only performs exceptionally well but looks fashionable, it becomes a much more appealing option.

Its air multiplier technology not only provides a cooling breeze, but it helps direct pollutants in the air back to the purifier to keep the air in the room nice and clean. Bonus points go to Dyson for noise levels too, with notably quieter performance overall compared to cheaper air purifiers.

The only frustrations are with the controls; it relies almost entirely on a rather small remote, and with no onboard controls or smartphone app compatibility, you’ll lose access to lots of functionality if you lose it.